Monyog MySQL Monitor 6.54 Has Been Released

This release is a maintenance release fixing a few minor (and mostly rare) bugs as well improving performance when viewing historical data.

Further when adding new servers, the “query sniffer” will now be enabled as default.  With recent MySQL/MariaDB servers, the overall server configuration is not as much a source of performance problems, as it was in the case with older servers. Focus in server performance optimization has moved from overall server configuration to query analysis. The new release precisely reflects this focus. 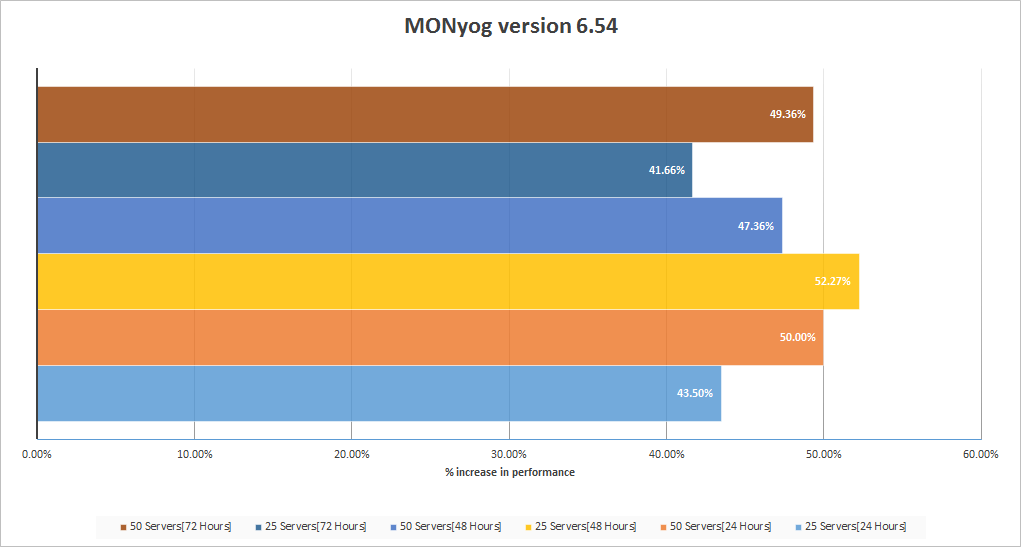 NOTE: The performance chart is for Monitor's tab history timeframe with 1-year data of 200 servers registered with MONyog.

* Monyog.log file logged bogus SQLite errors like “not an error" if UDOs were enabled in Monyog in some cases.
* The definition for the counter “Free disk space” in the “Linux” group was misleading as we were giving the free disk space of the volume where mysql binary resided given by “basedir”, instead of giving the free disk space on the volume where data directory resides given by “datadir”.
* The column “Rows examined” in Performance_Schema based sniffer printed negative values, if the number of “Rows examined” exceeded the value 2G.
* In Real-Time, charts for Tables tab were not displayed in some rare cases.
* We  are now discarding  GTID-related system variables that are changed by MySQL server itself from the “Track Config” tab. These system variables (gtid_executed, gtid_owned, gtid_purged etc.) change if a new transaction occurs in Master and considering them would raise bogus alerts that configuration was changed.

* Monyog will now have sniffer enabled by default for newly registered MySQL servers. If Performance_Schema is enabled for the MySQL server then Performance_Schema mode will be used, else Processlist mode will.
* Improved the load time of Monitors page. It is noticable in particular when "History" timeframe is used with a large range (several hours or more).