In the data-driven era, where data is an attractive target for cybercriminals, this is a critically important capability as businesses increasingly rely on their computing environment.

Companies cannot afford the risk of an unauthorized intrusion into their network that could potentially put enterprise data resources and business operations at risk. In the current landscape of cyberattacks and ransomware, security is understandably an organization’s primary concern. 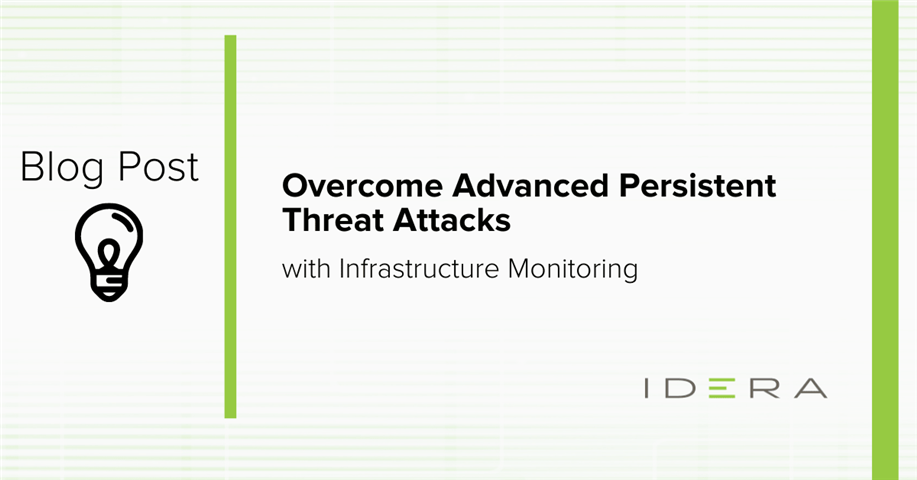 The media’s focus has been on successfully executed ransomware attacks that cause immediate and measurable damage to the affected companies. Once an attack of this nature has been perpetrated, victims have little choice but to rebuild systems via a disaster recovery plan or accept the criminal’s demands.

But the attack may have been planned some time before it was triggered and there may have been signs that if recognized, could have changed the outcome or eliminated the threat.

Some hackers prefer brute-force methods to gain entry and quickly take action against the compromised systems by stealing data, causing damage, or planting malware. Other more subtle techniques can be just as dangerous and give cybercriminals a chance to identify the most valuable targets within their reach.

A particularly perilous form of cyberattack involves implanting an advanced persistent threat in an organization’s infrastructure.

APTs make use of a five-stage methodology to find their targets and may remain undetected for many weeks or months. The actors behind the APT use their unauthorized access to move around an infrastructure to determine when and where to unleash their malware or breach data resources.

The Five Stages of APTs

Following are the stages of an APT intrusion:

Once embedded, APTs can essentially initiate an attack at their leisure. This could take the form of a ransomware attack on an organization’s most critical systems, stealing sensitive information from enterprise databases or using compromised computing resources for purposes like cryptomining.

One of the characteristics of APTs is their ability to remain undetected by standard security measures. It takes deep knowledge concerning the normal operation of the connected infrastructure components to identify the anomalies that can indicate infection with an APT.

Curious activity such as mysterious outgoing traffic or servers attempting to connect with other machines usually outside of scope can be signs that hackers are moving through your infrastructure.

Effective monitoring can provide clues that an APT has been introduced to the computing environment as well as identify other anomalies that may indicate the infrastructure is under attack. Using this knowledge proactively can minimize the risk of a successful attack.

It’s essentially a game of cat and mouse between IT security initiatives and clandestine hackers lurking in what may appear to be secured systems. A combination of real-time monitoring and analysis of historical monitoring trends can alert teams to potential business-impacting danger.

How Monitoring Can Help Minimize Other Security Risks

APTs aren’t the only threat that infrastructure monitoring can help minimize. Following are some examples of how these monitoring techniques can protect an organization from other kinds of attack:

Network and server monitoring can uncover attempts to gain access to systems using brute-force methods to guess passwords and comprise security. Identifying multiple failed logins can alert teams that a specific server may be under attack and allow them to bolster security and keep a close eye on the system.

While cryptomining in itself is not a malicious activity, using cryptomining malware to steal enterprise computing resources to perform the activity can cause serious negative consequences for the victimized company.

Cryptomining is a very processor-intensive activity that can result in overheated components that wear out quickly and mysterious performance issues afflicting the compromised systems. Issues such as unexpected spikes in CPU usage trends can identify systems that may be being used by hackers (cryptojackers) for cryptomining.

The Benefits of A Comprehensive Monitoring Tool

Uptime Infrastructure Monitor provides the type of information regarding a computing environment teams can use to identify potential risks and address them proactively.

The tool can monitor servers, virtual machines, applications, and network devices from a unified dashboard. Uptime can be deployed either as an agentless or agent-oriented monitoring solution.

Due to the threat APTs pose to businesses, it is not sufficient to simply rely on monitoring tools to generate alerts when systems fail. Teams need to study the reports available from their monitoring tool to uncover the more subtle signs of intrusion that precede an impending attack.

Uptime gives teams the data they need to proactively strengthen security in their quest to protect enterprise computing resources.