Why Netflix decided to migrate to AWS?

Netflix recently published an article describing the completion of billing migration to Amazon Web Services. More than half of the services including all the customer-facing services of Netflix were moved to the cloud before 2015.

In early January 2016, Netflix completed their cloud migration and have shut down the last remaining data center bits used by their streaming service. This has prompted numerous opinions on the viability of hosting on a cloud platform, irrespective of the extent of the business operations.

Let us take a look at what were the driving forces behind Netflix's decision.

Why AWS for Netflix?

Netflix started off as a DVD subscription service and later moved on to the digital platform. In the early days as a DVD subscription service, Netflix had encountered a major database corruption that witnessed a delay of three days in delivering DVDs to the customers. In any business, it is important to avert bad customer experience to scale up and build a trusted business model.

This was the moment when Netflix considered to look for a database platform that could help in overcoming some of the critical issues, mainly minimizing downtime.

The cloud platform – AWS, in Netflix’s case – provides a range of benefits to organizations, irrespective of their sizes and extent of their operations. For instance, AWS provides an easy to administration tool for a secure and scalable workflow.

When Netflix migrated to AWS, the cloud platform provided them with the necessary ammunitions to grow the company's operations rapidly and helped them sustain that growth. As was mentioned in Netflix’s blog "Supporting such rapid growth would have been extremely difficult out of our own data centers; we simply could not have racked the servers fast enough."

How did AWS help?

Netflix is currently present in 190 countries. It becomes imperative to avert bad customer experience while migrating to a new service. And that's what Amazon web services provided them. The elasticity of the cloud platform allowed them to add 1000s of virtual servers within a matter of a few minutes. They were able to expand their services to all the countries with minimal or rather negligible issues.

Leveraging multiple AWS cloud regions across geographies enabled Netflix to dynamically shift and expand their global infrastructure capacity across all countries they are present in. This provided for a brilliant customer experience wherein entertainment provided by Netflix continued to rule, uninterrupted.

As shown in the diagram, Netflix witnessed a tremendous increase in streaming hours from 2008 onwards. This was complemented with the company's decision to migrate to the cloud. 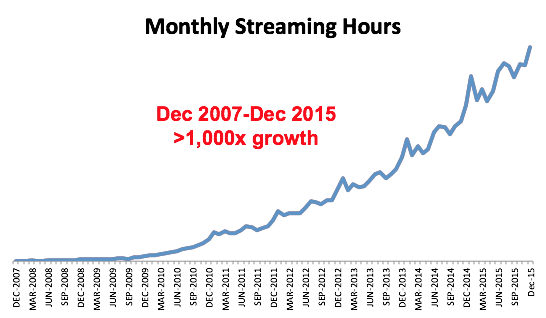 On the other side, Netflix's costs were cutting down to fractions per server. This not only helped them save money but also created an opportunity for them to add more resource hungry features.

Our take on Netflix’s migration to AWS

Amazon Web Services offers a range of benefits that help companies to be future ready and optimize the workflow for scaling up their business operations. For a company of Netflix’s range of operations, moving to the cloud platform is the next logical step. The platform will help them in effective database monitoring and address any issues that stumble upon at any point of time.

We believe AWS not only provides for reduced costs but also enables better infrastructure capabilities for the companies.

What do you think? Let us know your thoughts in the comments section below.

MONyog is a leading MySQL monitoring tool that is built on an agent-less architecture, specially designed for cloud database monitoring. You can download our 14-day free trial here.