The story has it, on February 14th, 1995, in San Francisco, when Anders Hejlsberg was presenting at the Delphi launch some of the staff from Microsoft fell out of their chairs. Everyone was so blown away Anders received a standing ovation. There was a reason Microsoft hired him the next year to become a Distinguished Engineer and Technical Fellow. He went on to design J++, C#, and Typescript, winning the 2001 Dr. Dobb’s Excellence in Programming Award.

In 2005, to celebrate Delphi’s 10 birthday Anders sent the following email to the Delphi team:

Imagine that, 10 years. I still remember the Valentine’s Day launch in San Francisco. It was an awesome moment. You don’t get a standing ovation from several thousand people every day–boy, did that feel great.

Over the years several Microsoft folks that attended the launch have told me how they were constantly hearing oohs and aahs from people around them, and how they were completely floored when I forced a GP fault in the demo, but the app kept running. Good stuff!

I found the script and all the demo files I used in my launch talk. They are all in the attached .zip file. The Athena bust shown in the little “speed is” clip now sits in my home office.

I wasn’t able to find the video clip (I’ll keep looking) but the script and source code are still available.

A lot has happened since 1995 though. Delphi was originally released with a 16-bit compiler for Windows 3.11. Later that year Windows 95 came out as a full blown 32-bit OS, and Delphi 2 emerged shortly later with a 32-bit compiler to support it. Over the years Delphi’s always been the best development tool for building Windows applications. With each new Windows release, Delphi is updated to support that OS and all its new features.

In 2002, Delphi 7 may have been peak popularity. Unfortunately, Delphi 8 was focused on .NET as Microsoft indicated that Windows Vista was expected to be a .NET only platform.

2007 was when Delphi started to make a comeback, and Nick Hodges compiled 3 lists of What’s New since Delphi 7 (Hint: A lot!)

Delphi XE was released in 2010. That is over 8 years ago, and a lot’s happened in that time. This is a brief list of some highlights from each release. I’m sure I’ve missed some significant features.

In 2011 Delphi started adding new platforms with Windows 64-bit & macOS. Since then it has come to a total of 8 platforms supported by our favorite development tool. Delphi sure came a long way from 16-bit Windows! 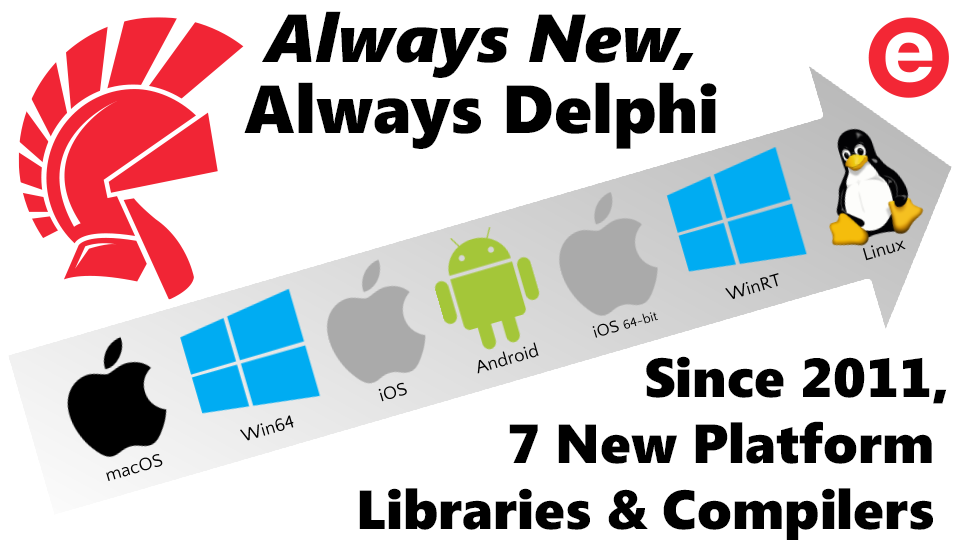