RAD Studio 10.3.2 comes with the up-to-date version 1.68 of Boost for both Win32 and Win64 Clang-enhanced compilers, plus Boost for the classic compiler

The 10.3.x version of C++Builder has focused so far on upgrading the C++ toolchain to support C++17, as well as providing more performance, a better RTL and more; and on Code Insight such as code completion. (There are some nice additions elsewhere, such as IDE performance, which apply equally to both Delphi and C++.)

The third main item for C++ in 10.3.x has been to provide updated and modern libraries. The most key library is Boost, and several months ago we provided Boost 1.68, a recent and up-to-date version, for the Clang-enhanced C++ Win32 compiler. At the time, Win64 remained using the older v1.55.

In 10.3.2, this version of Boost is now also available for Win64, meaning this up-to-date version is available for all of Windows, just like the C++17 compiler. You can install Boost very easily through the GetIt package manager, found in the Tools menu: 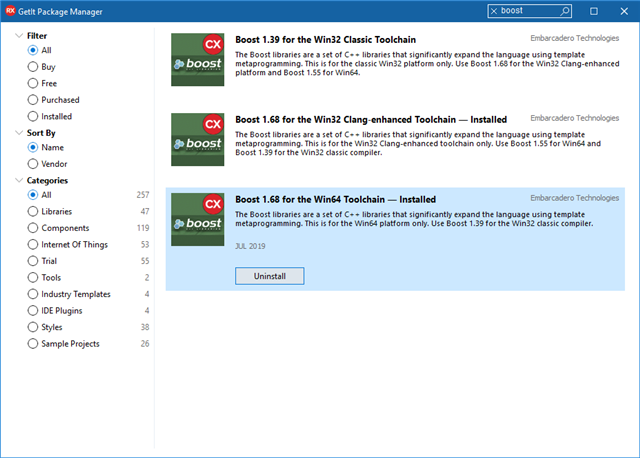 We’re the only compiler vendor who provides an edition of Boost packaged alongside the C++ product, and this is a huge benefit to you if you use C++Builder. Boost is a huge and powerful collection of libraries. Some of the completely new ones since 1.55 that you can use today in both Win32 and Win64 apps include:

Also supported are libraries like Boost.asio, a famous library for asynchronous network and other I/O; Boost.InterProcess for interprocess communication; Boost.lockfree for non-locking data structures; and more.

We plan on keeping this up to date, and so Boost 1.70 will be available in future, for example.

We haven’t forgotten the classic bcc32 compiler either, and Boost v1.39, the most recent supported by the classic compiler, is also available in GetIt.