I was really excited to see BriskBard by Salvador Díaz Fau as the April 2018 winner of the Cool App Contest. BriskBard is a browser, and a whole lot more. All  the other browsers out there are just browsers, while BriskBards is a web browser for Windows that includes an email client, a media player, a news  aggregator, a contact manager, an FTP client, a usenet newsreader, an IRC client, and several web developer tools. Did I mention it is also free? Think of it  as your one stop shop for all your internet related tools.

BriskBard is built with Delphi 10.2 Tokyo along with Indy, Hunspell, OpenSSL, SQLite, and three HTML rendering engines. It includes both Blink (used by  Chromium), Trident (used by Internet Explorer) and it’s own custom rendering engine. To take advantage of Blink/Chromium Salvador created  the  CEF4Delphi open source project which makes it easy for Delphi developers to use DCEF3 (made by Henri Gourvest). 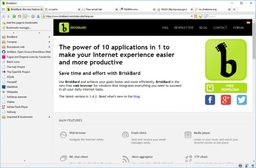 When talking to Salvador about his use of Delphi in BriskBard he said:

Pascal was one of the first computer languages I learned as a kid and I was happy to see that Delphi was one of the IDEs used in my university. Delphi made my student life much easier because it uses a strongly typed language that allowed me to detect mistakes even before I built my programs. Many other features also helped me a lot, like the form designer, templates and automatic block completion but what I like most about Delphi is its speed. Simply put, Delphi is a Formula 1 car in the IDE race.

It’s not unusual to find open source projects written in other languages that take several hours to build using a high end computer. The worst case I’ve seen is a project that takes more than 6 hours using an Intel I7 with more than 16Gb of RAM. I can’t imagine how much time it would take to build that project in my 10 year old computer. In contrast, I’ve seen large Delphi projects built in less than 2 minutes on my old computer. People often neglect this but in my opinion it’s one of the most important features in Delphi. Delphi 10.2 can also be used to create cross-platform applications and includes countless new features that makes it one of the best IDEs in the market. Delphi is easy to learn, can create applications quickly and anyone can start using it thanks to the 100% discount in Delphi Starter Edition.

You can see a video overview of BriskBard on YouTube:

Interested in submitting for the Embarcadero’s Cool App contest? It’s open to any business or consumer application built with RAD Studio, Delphi or C++Builder. Embarcadero awards Cool App contest winners a $500 Amazon gift card and winning submissions are also highlighted on the company’s YouTube channel. For more information on the contest and a link to the submission form, click here.