The whole product team is very pleased to announce that RAD Studio, including C++Builder and Delphi, v 10.3.2 is now available. If you have an active update subscription, you can download it now:

There are some great improvements for C++ and the Delphi & C++Builder IDE: 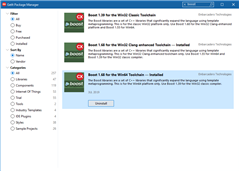 Leverage the latest C++ language features in apps built for both Win32 and Win64, with complete C++17 support for Windows

A large number of quality improvements to the IDE, including bug fixes, style improvements, and performance. For example, changing layouts or changing themes takes a fraction of a second.

We’ll have blog posts about all of these features going in-depth over the next few days. You can also ready Sarina’s 10.3.2 announcement for information on other new features in RAD Studio and Delphi.

On Wednesday July 24, we have a public webinar where you can learn more about 10.3.2, including demos of many of the features and a Q&A at the end. Join the webinar and see everything new and improved!