On February 14th, Delphi’s birthday, we released RAD Studio 10.3.1, a point release to 10.3 Rio. We have a number of great improvements this release I’d like to highlight. 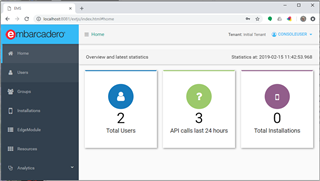 RAD Server is our platform for building services, such as REST/JSON. This is a very keyword-driven explanation of RAD Server. One great way to think of it is not just as a way to create new services (very useful) but as an easy to internet-enable your existing desktop applications. Suppose you have a Windows application and your customers are asking for an online version: use RAD Server to turn your app logic into a web backend service, and write a small frontend in something like ExtJS.

In 10.3.1, we have a new UI for the RAD Server console. Not only is this much nicer to use, but it’s also written in ExtJS. Read more about it on Marco’s blog here.

Apple has a new requirement coming into effect in March this year, that apps are built with the iOS 12.1 SDK and fully support the iPhone XS Max and iPad Pro.

We’ve added support for this SDK, and also added app icon and splash images for these devices. We also support the iPad Pro native resolution, a great addition if you are targeting this iPad. Read more about it on Sarina’s blog here.

What’s one of the most important things when writing code in the editor? Easily moving around between useful parts of code – or, finding those useful or important parts of code in the first place. In RAD Studio 10.3.1, we’ve added two new productivity tools aimed squarely at making navigation faster. These are available in GetIt, and are called Bookmarks and Navigator.

Bookmarks is all about remembering a location and quickly going there: replaces the IDE’s inbuilt code editor bookmarks with an unlimited number, a single shortcut to place one, a dockable window listing all bookmarks including contextual information about where they are, such as the name of the method they’re in, and more (such as caret bookmarks. Ever wondered what a caret bookmark is? Read my blog post to find out.)

Navigator is about finding the important code in the first place: for Delphi only (no C++ support yet), you can press Ctrl+G and it will show a list of all important parts of your current unit – the methods, the type declarations, the uses clauses, everything. If you want to go to the method that backs a property getter, you can do that – just type “prop Foo read” and it will show the getter for property Foo. More than that, for both Delphi and C++, it adds a minimap to the code editor – a visual representation of your code that can replace the scrollbar. Read my blog post to find out more. 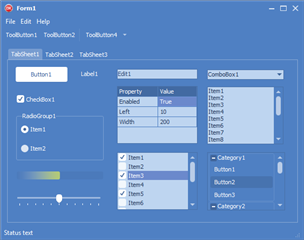 One of the most impactful features our UI libraries provide is comprehensive theming. The VCL allows your entire app to be themed,  and this is using real native Windows controls despite looking completely custom. FMX, our cross-platform UI library, does exactly the same. We see a lot of customers use themes to give their app a visually distinct look and feel, while retaining the usability and features of the underlying controls. In fact, RAD Studio itself does exactly this, using VCL Styles to have its own version of the Windows UI that is usable and clean, and instantly recognisable as RAD Studio / Delphi / C++Builder.

In 10.3.1, we’ve added ten new VCL styles, and five new FireMonkey styles. They all look great – my personal favorite is the FMX style “Stellar”, a summer sky-coloured theme, pictured to the right.

Many of these styles also come in different color variants! Read more about them on Sarina’s blog.

Firebird is an open source database. Until recently, both it and Interbase used the same FireDAC driver, but recently that has been split into two drivers. Taking advantage of this, we’ve added some specific features for Firebird, including support for Firebird 3.0 and Firebird Embedded.

Read more about this on Marco’s blog.

These are important libraries, and on Windows, we’ve added a number of new features including support for compression decoding in the HTTP library and client certificate support and a number of other improvements for SOAP. Read more about this on the What’s New page under Additional Notes.

In 10.3.0, we released our new C++17 compiler for Win32. In 10.3.1, we have a number of improvements and fixes both to the compiler and to the RTL. This release is well worth installing, and don’t forget that 10.3 and 10.3.1 include a new version of the Dinkumware STL, for both Win32 and Win64. (Win64 doesn’t have a C++17 compiler yet, but us making the Dinkumware libary available for both means you can still use parts of C++17 that don’t require language changes on Win64 – for example, string_view.)

This release includes a large focus on quality, fixing over 150 customer-reported bugs and issues. 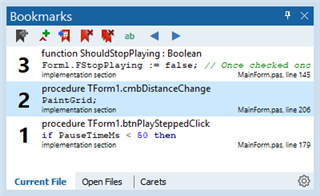 There’s a lot more that’s new in RAD Studio 10.3.1. For example, did you know we have better keyboard handling for TEdit on iOS, or some odd behaviour with IDE toolbars is now resolved, or we’ve updated the Android manifest settings for Android 9 (note you will currently want to update the TargetVersion parameter), or there are improvements to TMapView and TWebBrowser’s drawing on Android, or that our JSON library has improvements too? For full information about everything that’s new in 10.3.1, you can read the What’s New page on our docwiki.

The installers are available for download for customers on Update Subscription on the following registered users download pages: