Many thanks to Eli for this great overview of C++Builder and what it offers to application developers.

Embarcadero’s C++Builder is a versatile rapid application development tool which leverages powerful technologies to help you quickly build beautiful desktop and mobile apps with the power of C++. C++Builder has built-in support for platforms like Windows and iOS, technologies like JSON/BSON, BlueTooth, REST, Unicode, and DirectX 12, and databases like SQL Server, MySQL, and SQLite. The C++Builder IDE makes it easy to build out full featured C++ applications using powerful visual design tools and quickly integrate them with your data using technology like LiveBindings.

It has powerful visual design tools for rapidly designing and developing visually stunning apps that surpasses other C++ UI tools such as MFC or Qt. Features like a visual form designer, styles, native Windows high DPI awareness, and 4k monitor support for your apps make building beautiful crisp apps easy. Low code tools may leave you without the customization features you need to deliver the apps you want.

C++Builder has time saving technologies such as data aware controls and LiveBindings to bind between UI and data layers. Productivity enhancements with robust frameworks like the native Windows UI library, the VCL, and cross-platform GPU-accelerated FMX plus a feature-rich IDE are core elements that can also save you development time. Hundreds of extensible visual components and a rich third party ecosystem gives you the flexibility you need to quickly develop your apps exactly the way you want without sacrificing features or making unnecessary tradeoffs. 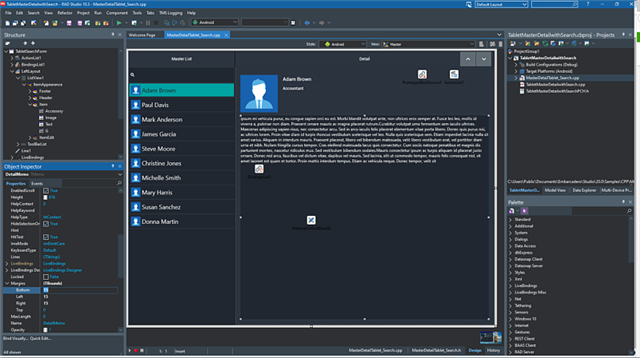 The award winning C++Builder IDE is made up of a number of productivity enhancing tools centered around the visual form designer. When you first create a C++ project you are dropped right into the form designer where you can start prototyping or building your application right away. Apps built with the VCL framework use the native Windows API controls, providing a native user experience, but with many extensions such as styling and powerful custom controls. Other tools may require that you build the user interface using only code, with clunky UI layout tools, or with non-native controls that imperfectly mimic the platform. Not only does C++Builder provide a development experience surpassing those tools, but our customers say they can deliver a C++ app to their customers up to 5x faster when they take advantage of C++Builder. The visual Rapid Application Development (RAD) tools provided by C++Builder are the core of the IDE and make building beautiful user interfaces front and center in the application development process.

C++Builder reduces the amount of code you have to write to get the job done through the use of visual and non-visual components and classes, powerful data binding technologies, and data access libraries like FireDAC. Other tools and environments require that you actually write more code to integrate necessary libraries, which is not time well spent, and can increase technical debt. However, C++Builder’s built in runtime library reduces the code you need to write through components which makes it easy to access technologies like REST and Bluetooth plus data formats like JSON and XML. This can save you lots of time instead of trying to find and integrate disparate C++ libraries into your toolchain and codebase.

Smart developers and Agile software teams write better code faster using modern OOP practices and C++Builder’s robust frameworks and feature-rich IDE. Spend less time waiting for lengthy compiles with our highly optimized compilers for each platform. Code Insight  delivers auto-code-completion based on your C++ code and used libraries to help you code quickly and accurately. Get hints and tips from inline documentation as you write code. Keep your development agile with the VCL designer and Live Templates. Finally, you can use C++Builder command line compilers that are ideal for integrating into continuous build configurations quickly using our support for MSBuild or CMake projects. 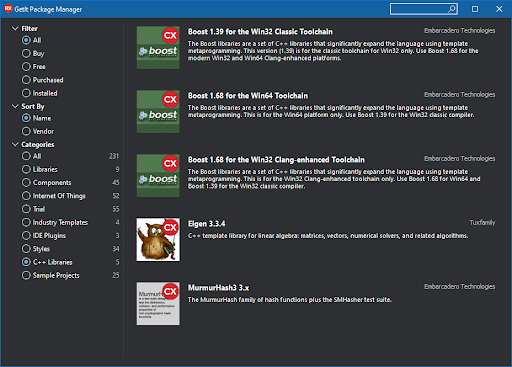 C++Builder provides object-oriented, fully extensible, and reusable libraries like VCL and FMX that make for robust application architecture. Visual Form Inheritance and Form linking can be used to reduce coding and simplify maintenance. Components in C++Builder can be both visual and non-visual. You can create new components based on existing components and add your own new functionality.

C++Builder’s rich third party component and library ecosystem brings a wide variety of new functionality like charts, reporting, grids, new databases, and much more to your apps. Frames and component templates allow you to create visual reusable component layouts and C++ code in a frame or component template that can then be included and reused in forms at both design time and runtime. All of these can help you reduce technical debt and deliver projects on time and under budget.

The Visual Form Designer, productivity enhancements, time saving technologies, and extensible component system all combine to create an easy to use powerful robust development tool for rapidly building out your C++ applications. Upgrading from low code tools that limit your functionality to C++Builder is an easy choice. And switching from other complex C++ UI tools with low productivity and clunky visual design tools can lead to a huge savings in time and money. Our customers report they are able to build apps 5 times faster with C++Builder than with competing tools. What are you waiting for?

Ready to get started building visually stunning apps with the power of C++? Start for free!