This patch addresses a number of issues in RAD Studio 10.4, pertaining to Delphi Compiler, the RAD Studio IDE in general and the new LSP-based Code Insight in particular, plus C++ Builder Android exceptions and some debugger issues.

The patch includes detailed installation instructions as part of the Readme. Please read the steps carefully (or the corresponding steps in this blog post), as the GetIt download does not install the patch automatically. You must follow the instructions in order to install. Just using GetIt is not enough.

We recommend you use GetIt in the RAD Studio IDE to download the patch. The patch should be listed on the Welcome Page in the IDE, and available in the “Patches and Hotfixes” section of the GetIt Package Manager, as depicted here:

There is more one patch, depending on your edition. You should see only one of them (Professional or Enteprise and for different personalities), install it.

Note: Installing Patch #2 through GetIt in the IDE requires an internet connection. If you installed RAD Studio via the Offline (ISO) Installer, you might also need to issue the command GetItCmd.exe -c=useonline (unless you have already issued the command once).
You can also download the patch via the new download portal, my.embarcadero.com, copy it to the development machine, unzip and follow the same installation steps.

From GetIt once you select the Patch #2 and press the install button, it will ask you to accept the RAD Studio license (under which it is released). Agree to the license and it starts the download. This will take some time:

How to Install Patch 2

Once the download is completed, GetIt will open the readme file and the download folder (see below). The installation of Patch 2 needs to be done manually, as GetIt only downloads the patch, it does not install it.

The patch executable is copied along with a ZIP file into a folder like:
C:\Users\<name>\Documents\Embarcadero\Studio\21.0\CatalogRepository\10.4Patch2xx-10\R104_Patch2 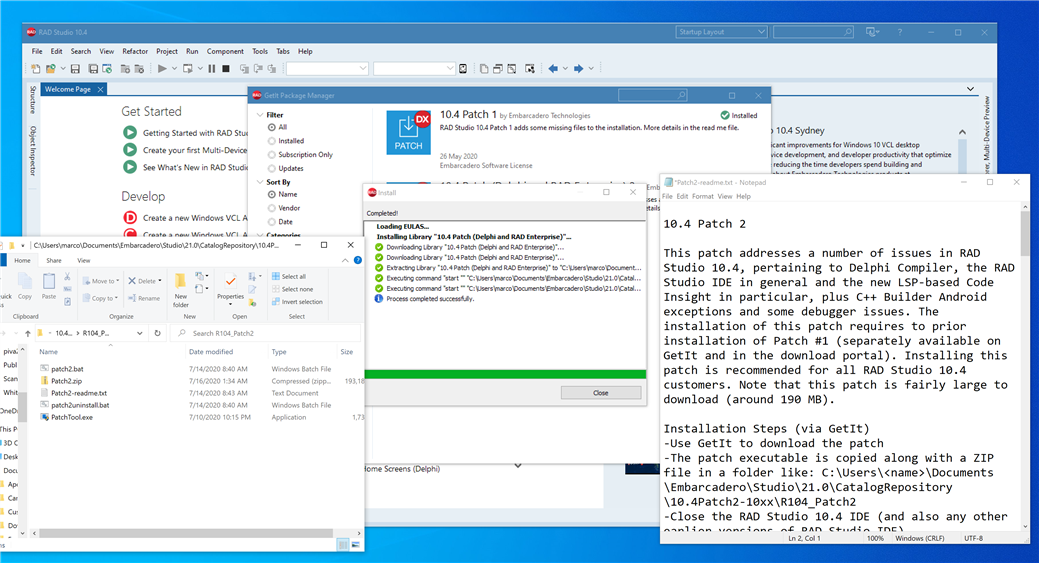 The folder is opened automatically by the last GetIt action. Now, close the RAD Studio 10.4 IDE (and also any other earlier versions of RAD Studio IDE that may be running) and from the folder mentioned above, run the batch file patch2.bat.

Note: The following installation steps might trigger warning by your antivirus software.

The process requires elevation and proceeds showing the steps and adding a detailed log file to the catalog repository folder:

As you can see in the image above, the installation displays some warning (actually 2) as it adds files that were missing in the original 10.4 release. This is expected. The information displayed on the screen is also logged in a file called patch.log in the Catalog Repository folder for the patch.

At the end of the process, the command line window closes and you can restart the RAD Studio 10.4 IDE.

To verify that the patch has been successfully installed, you can look at the timestamp of the replaced files, for example getit270.bpl under the bin folder should have a July 2020 timestamp (rather than the May 2020 one most files have).

In case you run into any issues with the patch you can remove the it by closing RAD Studio, opening the Catalog Repository installation folder (the same folder mentioned above) and run patch2uninstall.bat. This will restore the backup files of the original version.

The patch process creates a backup of the files replaced in a _patch_backup subfolder of the RAD Studio main installation folder. For each execution, it creates a subfolder with the installation timestamp, which also includes an install.log file. As an alternative for uninstalling the patch, you can manually copy the files from this backup folder to the main BDS folder.