How to Increase Database Developer Productivity

Database developer productivity is a term that has slightly different meanings based on an individual’s point of view.

While the organization as a whole is generally working toward the same goal, competing factions may focus on different aspects of the finished product.

From the big-picture perspective of a management team, productivity usually refers to projects that are completed on time to address fluctuating business requirements.

In many cases, the details necessary to achieve the final objective are relegated to a position of secondary importance. All that matters is that the work gets done.

Database developers working in the trenches may have other considerations that dominate their elusive search for increased productivity.

They certainly want to meet the organization’s expectations, but need to be cognizant of the detailed workflow necessary to fulfill them. To developers, increased productivity means finding a way to perform their job more efficiently. 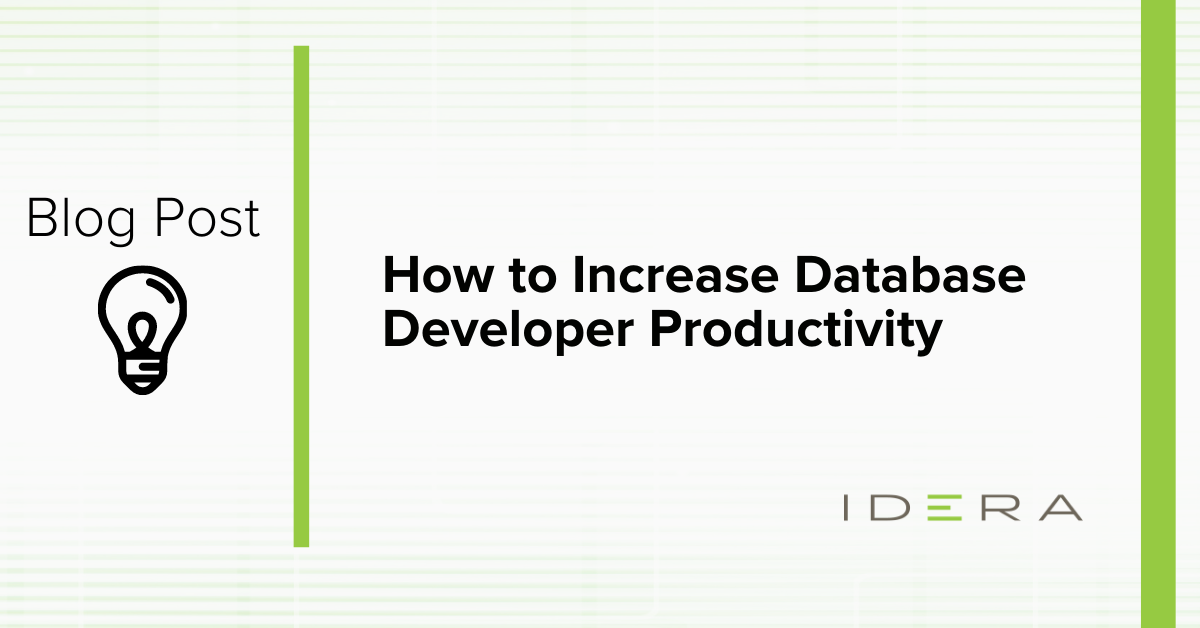 The Importance of Increasing Productivity of Database Developers

Several aspects of modern database environments pose challenges for database developers that can negatively impact productivity. Following are some of the difficulties developers must cope with daily.

The most obvious challenge is the prevalence of multiple database platforms with which a developer must cover. Some developers may be able to specialize in a specific platform, but the majority of practitioners will need to be comfortable working with more than one type of database.

This diversification may entail the use of multiple support tools with their associated learning curves. It can also lead to the loss of productivity when navigating between tools with different interfaces.

Repeated small errors can add up to a substantial loss of time when moving between systems.

Another issue with supporting multiple database platforms is the need to quickly access the systems.

Best practices suggest that different passwords should be used for each system. This can quickly become unwieldy and cause more small productivity hits as the staff searches for the correct login credentials.

The ability to write SQL queries is a mandatory skill for database developers. Getting bogged down resolving syntax errors and trying to optimize indexes can be productivity killers.

Tools that streamline this process are warmly welcomed by developers and can help them stay on top of the evolving demands of the user community.

Developers are often tasked with documenting databases that arrive in the environment due to mergers or acquisitions.

Newly acquired systems may be able to be easily consolidated with existing ones or might have nothing in common with anything the team currently supports.

Effectively handling new unknown databases requires techniques such as forward and reverse engineering to uncover the details of the database and create entity-relationship (ER) diagrams.

Communicating the value of data resources

An extensive repository of important data is a commodity that needs to be handled effectively to obtain its maximum value to an organization.

Developers can be challenged with communicating the information hidden in data resources to corporate decision-makers and other stakeholders.

Valuable insights are often available but need to be extracted through the developers’ efforts.

Reams of numbers may contain the necessary information but be inappropriate to communicate the pertinent points to the intended audience.

Graphs and more creative data visualizations make it much more likely that developers can communicate productivity with a diverse group of individuals.

Aqua Data Studio offers database developers a versatile integrated development environment (IDE) that can help alleviate many of the challenges outlined above. It’s a tool designed to increase the productivity of the development team in a variety of ways.

Multiple database support – Aqua Data Studio enables developers to work with over 40 different platforms from a consistent user interface. Login information is stored in the tool to streamline connectivity to a wide selection of databases including SQL Server, Oracle, MySQL, and Snowflake.

Visual SQL query builder – The creation of SQL queries is enhanced with a visual query builder that enables complex statements to be written without extensive syntax knowledge. Drag and drop JOINs for more intuitive and timely query building.

Aqua Data Studio improves the productivity of database developers with its dedicated features and functionality. Its support of multiple platforms means fewer software licenses which reduce the strain on corporate budgets. Both management and the developer team will benefit from adding Aqua Data Studio to the software toolbox.