What Is an IDE? – The Difference Between IDEs and Code Editors

When evaluating integrated development environments vs. code editors, the right option comes down to your requirements. IDE's have a broad feature set and code editing is just one capability. This post will help you understand the difference between IDEs and code editors and help you decide which solution is best for you. 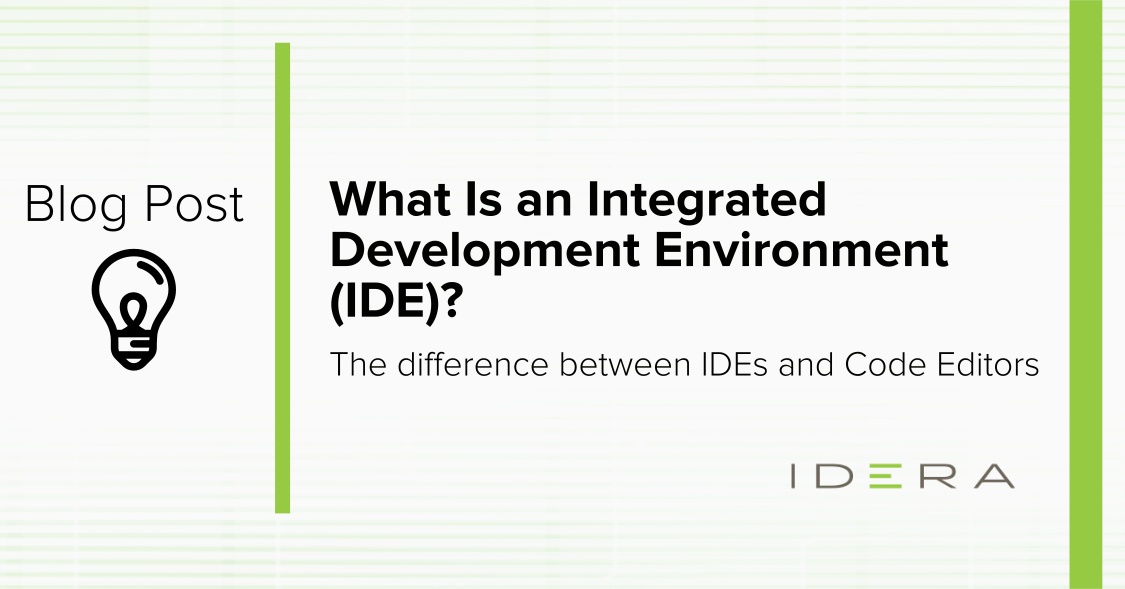 An IDE – is a multi-faceted suite of software tools designed to facilitate programming or development in a unified GUI (graphical user interface).

They provide programmers and developers with the means to create and edit code, develop databases, and carry out many other technical tasks.

So although there is some clear overlap with code editors, IDEs have a much broader range of functionality.

Additionally, when IDEs and code editors have overlapping use cases, the two types of tools provide substantially different ways of getting the job done.

Using an IDE simplifies the software development process by eliminating the need for programmers to use multiple tools when writing, testing, and debugging code.

An IDE enables a developer to remain organized as they work on different parts of a project.

Most IDEs have certain features in common as they are the most helpful to the programming community. These features include:

A glance at the feature list of an IDE is enough to demonstrate its enhanced versatility. One of the basic components of an IDE is a code editor.

The fact that an IDE contains a code editor drives home the point that an IDE offers more functionality than its individual parts.

That being said, there are valid reasons to use a code editor instead of an IDE in certain situations. The following are some of the advantages of using an IDE.

Following are some disadvantages that can be associated with using an IDE.

The simplicity of a code editor may appeal to new and experienced programmers alike. In some cases, it is easier to bang out some code with a favorite editor, especially if the assignment is a short one.

There may be no need for the extended functionality of an IDE when fixing a few lines of code.

The benefits of using an IDE become more apparent when teams are involved in complicated application or database development.

The enhanced features and collaborative opportunities make it worth the effort to master the learning curve required to use the IDE effectively.

Benefits of an IDE for Database Development

IDEs are commonly focused on a specific group of programmers based on the platform for which the code is being developed.

The specific needs of C++ programmers are very different from those of database developers. Trying to work with the wrong IDE can result in wasted time and frustrated programmers.

You can develop and program complex database applications without an IDE, but there are multiple benefits associated with their use.

An IDE designed for database developers should provide the following benefits:

Databases are complex entities that all have their idiosyncrasies. The right IDE provides the development team with the necessary functionality to address issues on their target platforms.

A well-designed database development IDE offers a streamlined and simplified method of accessing the systems with which they need to work. This can wind up saving teams a lot of time over the long run.

The ability to use a consistent user interface increases productivity and reduces the number of simple errors that can occur when switching among multiple software tools.

Keeping track of code updates and changes is essential when working on a complex project. It is even more critical when a team is working collaboratively with changes potentially coming from multiple sources.

Aqua Data Studio is a universal IDE that provides all the features database developers need to be more efficient and productive.

The tool offers a database team with a unified interface and streamlined connectivity to over 40 different relational, cloud, and NoSQL platforms.

Login information is securely saved in the tool, enabling users to quickly access all of the systems they support.

Integrated version control is available for use with the Subversion, CVS, Git, and Perforce platforms. Everyone on the team will always be apprised of changes that impact their projects.

Try Aqua Data Studio for free with a 14-day trial. It’s a great tool to streamline development and enjoy the benefits of a dedicated database IDE.