Recently, here at Embarcadero we’ve been celebrating a historic birthday, Delphi’s 25th birthday (Feb 14, 1995.) There have been some great blog posts, stories, and people sharing on twitter, not to mention an amazing Delphi 1 celebration website and an interview with Anders Hejlsberg and Chuck Jazdzewski.

However, two years after Delphi was released was another product, Delphi’s younger sister: C++Builder. C++Builder 1 was released on Feb 26 1997, and featured the same fast development environment as Delphi, but with a C++ outlook. That makes today its 23rd birthday. It was immediately successful, with extraordinary sales numbers (which I can’t share, but – they were good.)

C++Builder 1 was followed by C++Builder 3 (skipping v2) in 1998 to match numbering with Delphi 3 released a few months earlier. C++Builder 6 (2002) especially was a very popular version, akin to Delphi 7.

The key reason people love C++Builder is its ability to easily create applications – RAD development – combined with a large set of powerful libraries. (Our customers have regularly told us they get apps from idea to shipping faster than with other C++ tools.) After C++Builder 6 in 2002, there was a brief diversion by Borland circa 2003 with a product C++BuilderX, which shared a name but little else with C++Builder, forgetting the value and incentive for using C++Builder. Luckily, Borland returned to C++Builder with C++Builder 2006, and it’s been going strong ever since. In 2009, it was updated with Unicode support, and the next few years saw new platforms, the introduction of Clang (Embarcadero were the first to bring Clang to Windows, with a port of Clang 3.1 in C++Builder XE4, shipped in April 2013), and more. 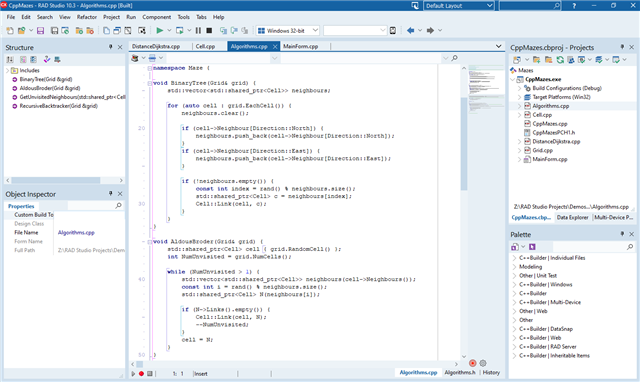 Today’s C++Builder supports C++17 on Windows, and also supports building apps for iOS. Android is on the roadmap for mid-2020. It has the same speedy and productive development experience that was the value of the first version, updated to today’s environments, and supports both native Windows and cross-platform development. It’s used by a wide variety of companies worldwide in areas ranging from video and movie production to marine science to hotel systems to nuclear engineering to in-house corporate apps. There is a significant chance you have seen or interacted with something that used C++Builder-powered software during its production. You can find the latest version, C++Builder 10.3.3, here. It has a free Community edition as well, based on a revenue limit, so suitable for hobbyists, early stage startups, etc, and a trial if you need the commercial edition. We think C++Builder offers something unique in its developer speed and libraries compared to other C++ solutions, and we’d love for you to try it out.